Lacewings get their name from the large, membranous wings of the adults. The larvae are alligator-like with sickle-shaped mandibles that feed on aphids and other soft-bodied insect pests such as mites, thrips, leafhoppers and mealy bugs. The common species in Kansas field crops is the green lacewing Chrysoperla carnea, although other species also occur. Adults are primarily nocturnal, but when disturbed, will leave their resting places on the undersides of leaves in an erratic, fluttering flight. The white, oval eggs are laid on the end of long stalks. The relative length of the stalk and the pattern in which the eggs are laid (singly versus in groups, in line or in a spiral) can be characteristic of particular species. 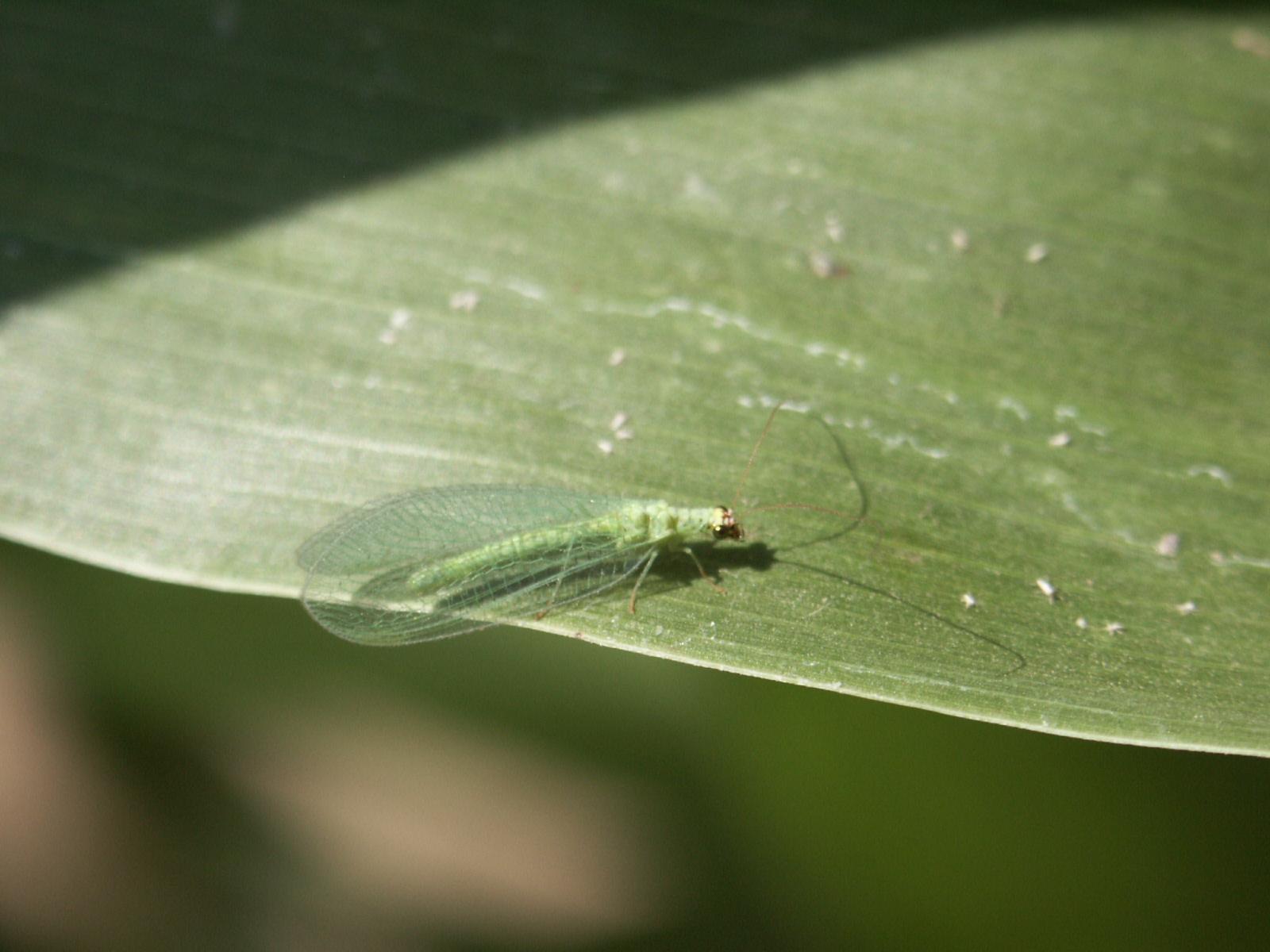 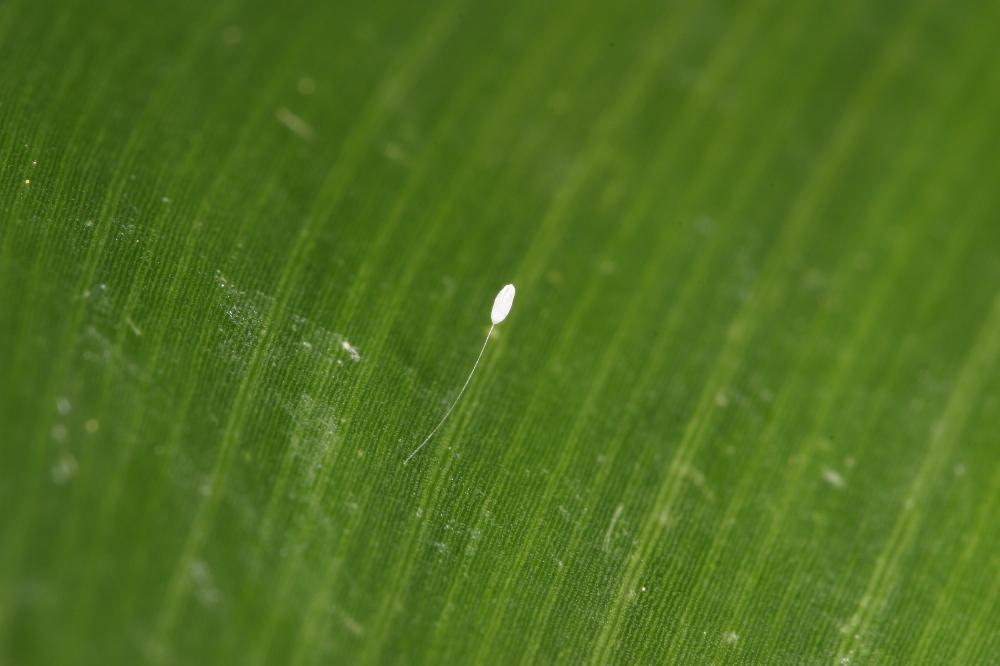 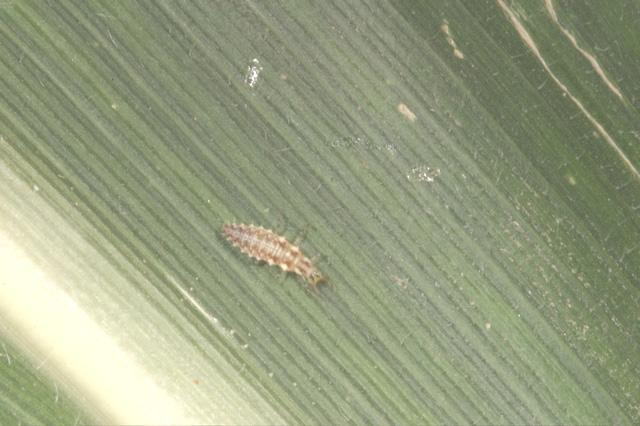 Lacewings are among the beneficial insects that are available commercially. Usually, the eggs are shipped mixed with a substrate such as rice hulls and some moth eggs for food. However, the larvae are highly cannibalistic and immediately begin to kill and eat each other upon hatching so they require immediate distribution in the field. Even then, lack of information on the habitat preferences of particular species, their climatic tolerances, appropriate release rates, and suitable release techniques are factors that have severely limited the usefulness of these insects in augmentative biological control programs.

Lady beetles or “ladybugs” probably are the most universally known group of beneficial insects. They are found almost anywhere and feed on aphids and a variety of soft-bodied insects. Several species are present in Kansas fields, including the following common species. The Convergent Lady Beetle (Hippodamia convergens) 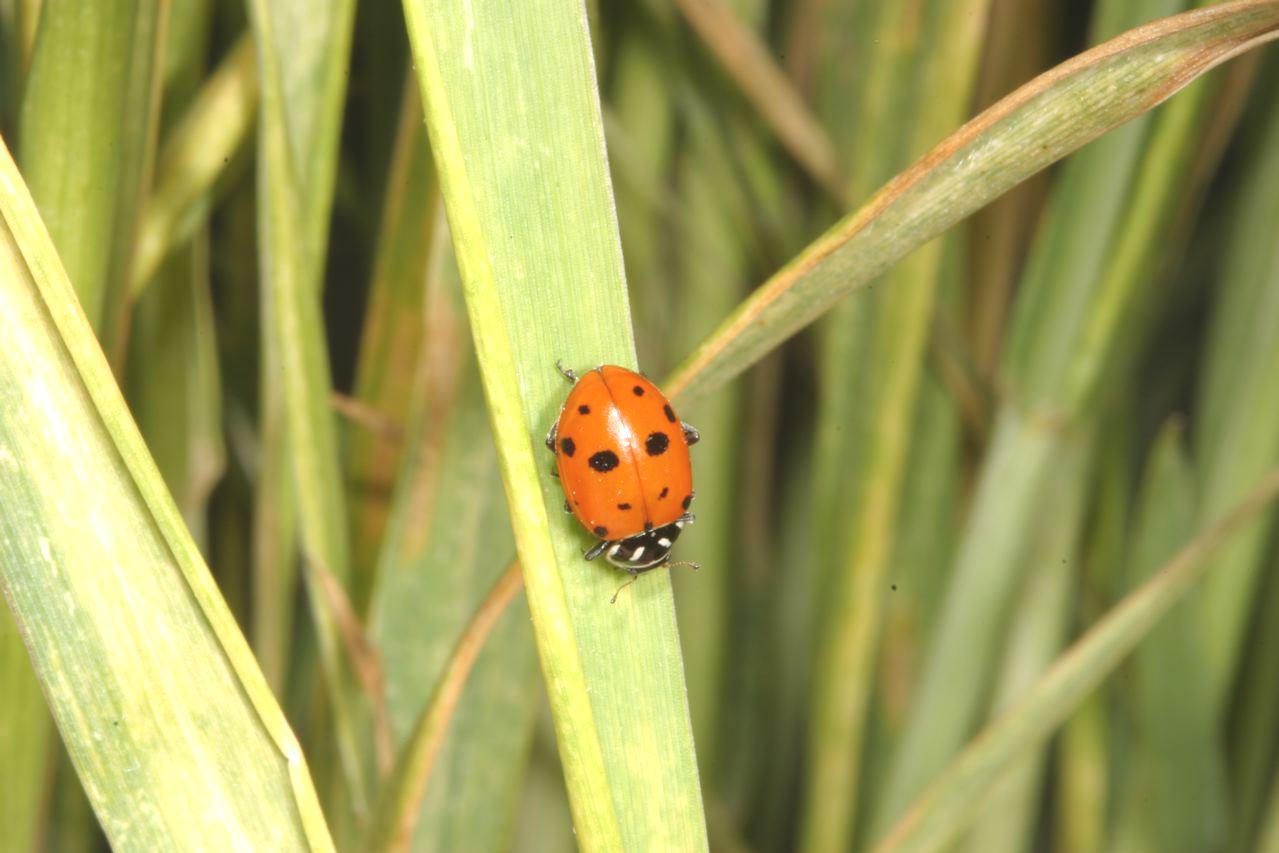 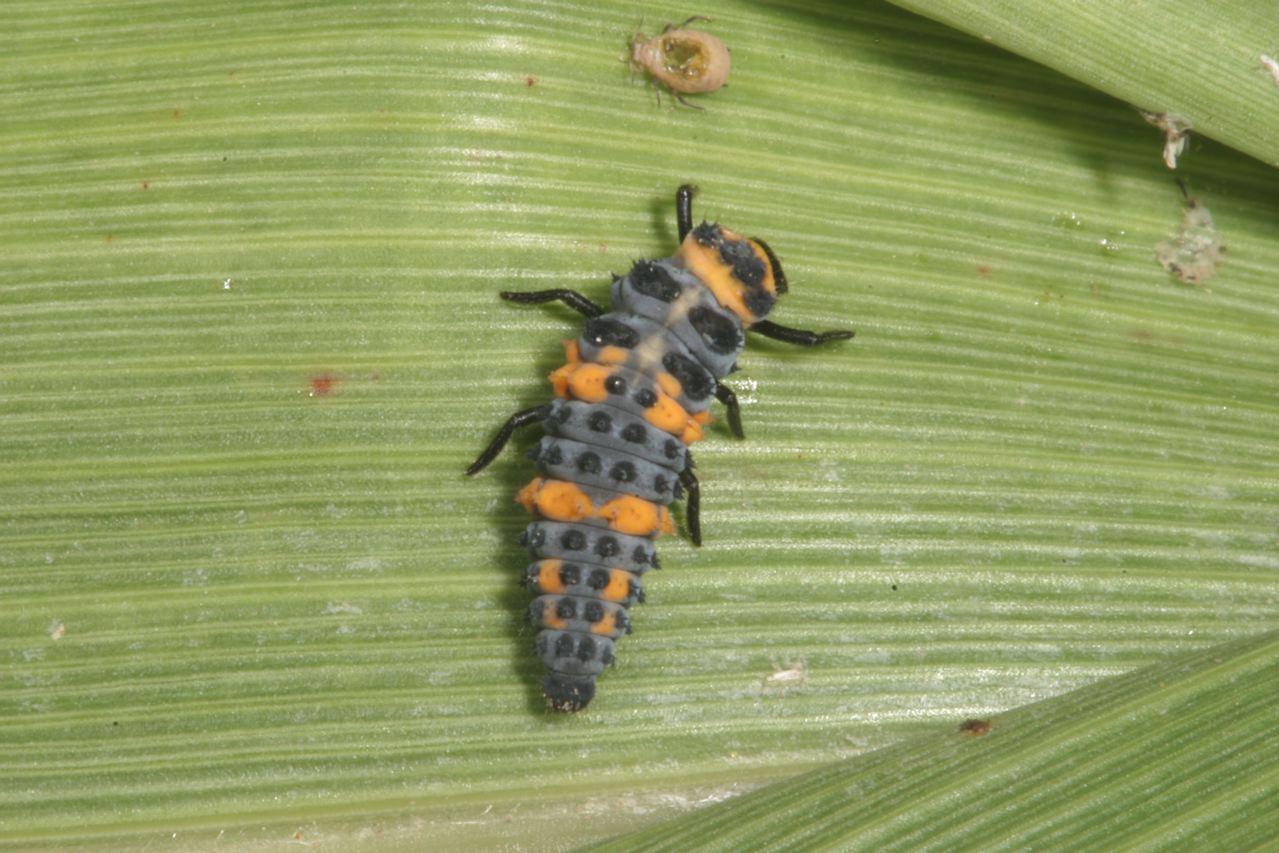 This species gets its common name from the two converging white lines on the black pronotum (the section of the body just behind the head) of the adult beetle. Adults are about 1/4 inch long and have orange wing covers that typically have six, small black spots. However, the number of spots can vary, and some adults have no spots on their wing covers. Adults and larvae feed primarily on aphids and it is considered a key biological control agent of cereal aphids on the Great Plains. Females lay clusters of 10 to 20 yellow eggs on plant leaves. Larvae are dark gray to black with pairs of orange spots on abdominal segments 1,4,6 and 7. This species is native to North America and has one or two generations each year in the Midwest. The pink or twelvespotted lady beetle (Coleomegilla maculata) Adults are pink to light-red and about 1/4 inch long, with six black spots on each wing cover and two black triangular spots on the pronotum. Both adults and larvae feed on aphids, mites, insect eggs, and small larvae of many insect pests including the European corn borer and alfalfa weevil. Plant pollen and fungal spores also are important components of their diet. This species has two to three generations per year in the Midwest and overwinters as large groups of adults in litter at the base of trees or along buildings. The sevenspotted lady beetle (Coccinella septempunctata) 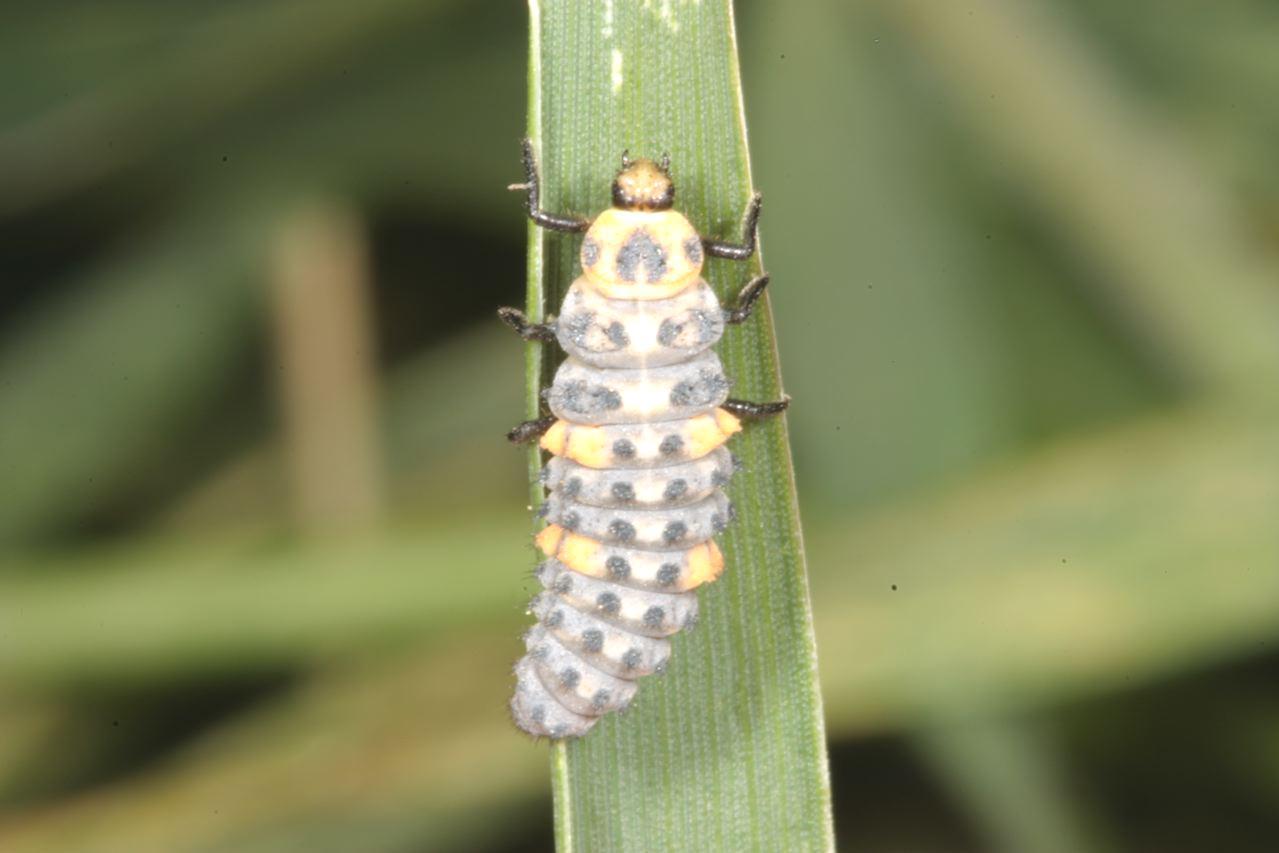 Sevenspotted lady beetle larva - Photo by Phil Sloderbeck This species was introduced into North America from Europe. Adults are large slightly larger than some of the other lady beetles (about 3/8 inch), and have reddish-orange wing covers with seven black spots. Larvae are gray with orange spots on abdominal segments 1 and 4. Adult sevenspotted lady beetles overwinter in small groups in hedges, or in leaf litter on the ground near the base of plants. Some other, smaller, lady beetle species (for example, Stethorus and Scymnus) play an often hidden, but nonetheless important, role in controlling field crop pests ranging from aphids to corn borers.