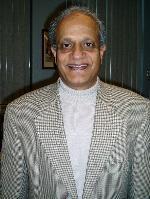 My role as department head is to provide leadership in all aspects of departmental administration such as budgeting, personnel issues and evaluations, graduate program coordination, facilitation of research, extension, and teaching activities, resource and space allocation, and advocacy at higher administrative levels.

At the 2004 annual meeting of the Entomological Society of America in Salt Lake City, I did a talk on effective grantsmanship, a link to which is available on this page.

My favorite insect is the Monarch butterfly, Danaus plexippus, because of its perseverance, tenacity and stamina! I have had an opportunity to see the Monarch's overwintering sites in the Mexican highlands a couple of times, most recently in February 2005. I have posted some neat pictures from that trip.

In addition to my entomological activities, I enjoy interacting with students, working On-stage and Off, working with Apple computers, web authoring, bungee jumping. elbow lifting, solving and creating crossword puzzles, and motorcycling. I own a Harley-Davidson 883 Sportster-Hugger, which is a lot of fun to ride.

My wife, Gita , is a professor and interim head in the Department of Apparel, Textiles, and Interior Design at KState and works in the area of textiles, especially kenaf. Our daughter, Megha, graduated in May 1999 from Manhattan High School in Manhattan, KS. On May 16, 2002, Megha graduated from New York University in the Big Apple. She completed her Master's in Public Health from the University of Kansas-Medical Center. Megha now lives in Manhattan (New York, that is) and is coordinating an NIH-funded study on HIV-AIDS at Albert Einstein College of Medicine. She was married on May 15, 2004 in Manhattan (Kansas, that is). Our dog, Atuk, is an Alaskan Malamute.

February 2002: Named Fellow of the American Association for the Advancement of Science

March 2003: Co-recipient (along with Lee Manske and Ralph Charlton) of Educational Project Award from the Board Certified Entomologists for the design of the KSU Insect Zoo

I maintain a research program in the area of insect behavioral physiology, of course, living vicariously through the efforts of an outstanding group of research associates/students. We are particularly interested in the reproductive physiology of insects. These studies involve various methods, including gas chromatography, mass spectrometry, olfactometry, electrophysiology, microsurgery, and various molecular and biochemical techniques. We have been concentrating on deciphering the dynamics of juvenile hormone and reproduction in Heliothis virescens, funded by grants from USDA-NRICGP and NIH. My lab is involved also in research on sex pheromones and insect-host interactions of various species of insects. Recently we received funding from NSF for examing the entomopathogenic nematode infection process. We successfully developed a diagnostic kit for field identification of the eggs of Helithis virescens and Helicoverpa zea. A field diagnostic kit - Hel-ID - is marketed by an Indiana company, AgDia. Just recently we have started a project on determining the feasibility of developing a diagnostic kit for identifying larvae of Heliothis virescens and Helicoverpa zea. We are also involved in a research consortium created with funding from the USDA-CSREES-RAMP prgram to deal with insect pests of stored products, and our laboratory specifically is involved in deciphering the chemical ecology and optimizing the sex pheromone of the saw-toothed grain beetle. Finally, we have a project on deciphering the overwintering ecology of lesser grain borer funded by a project from the EPA.

Pszczolkowski, M. A., A. Peterson, A. Srinivasan, and S. B. Ramaswamy. Pharmacological analysis of ovarial patency in Heliothis virescens Journal of Insect Physiology, 51:445-453

Pszczolkowski, M.A., A. Tucker, A. Srinivasan, and S.B. Ramaswamy. 2005. The raison d'etre for juvenile hormone in male moth abdomens. Journal of Insect Physiology (in press).

Rachinsky, A., Srinivasan, A., and Ramaswamy, S.B. 2003. Regulation of juvenile hormone biosynthesis in Heliothis virescens by Manduca sexta allatotropin. Archives of Insect Biochemistry and Physiology 54 121-123.