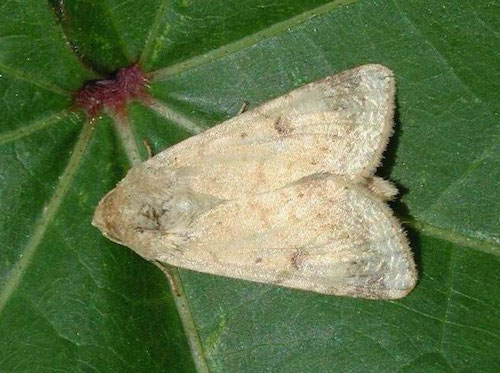 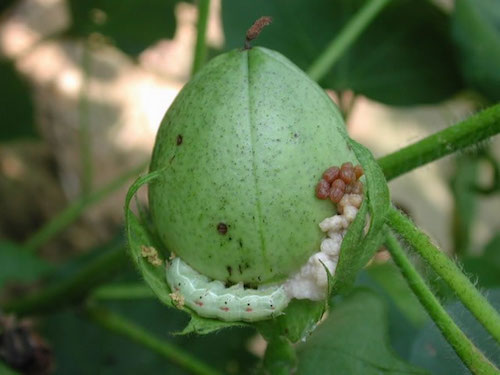 The cotton bollworm (a.k.a. corn earworm or sorghum headworm) is a serious pest in the southern cotton growing areas. In Kansas cotton, infestations are sometimes observed, although damage has been limited even when high infestations have developed in corn and grain sorghum. However, the potential for economic damage exists, and growers should watch for developing infestations during fruiting and boll development. The adult is a medium-sized, cream-colored moth and is seen frequently throughout the day during periods of heavy infestations. Moths lay eggs singly, mostly on the young terminal leaves and sometimes on leaves and squares within the canopy. Eggs are the size of a pinhead, white to cream colored and hatch in two or three days during warm weather. Young larvae are difficult to find until they are about three to four days old. At this stage, they are about ¼ inch long and brownish colored with some scattered hairs. The full-grown larva is about 1½ inches long with a light-colored head capsule. The predominant body color may range from pink or green to various shades of tan or dark brown. A series of dark stripes run lengthwise on the body. Larvae begin feeding on leaf tissue and small squares, then move down the plant and damage the larger squares and bolls.

Bollworm management is based on scouting for eggs or small larvae. Treatment is recommended when 10 eggs or five small worms per 100 plants are present during early bloom in late July and early August. Preventative treatment that might be applied during the pre-bloom period is discouraged because this can destroy many beneficial forms that keep bollworms and other pests under control. Chemical control is seldom effective after worms exceed ½ inch in length (five days old, third instar). Once the cotton has blooms within four to five nodes of the top of the plant, the need for bollworm control is usually over for the season. However, the impact of late season treatments will depend on the weather and in some cases these late blooms can add to final yields and thus treatments may be justified if populations are heavy and the weather remains favorable.

The use of Bt cotton is increasing in Kansas. The need for this technology is questionable given the generally low levels of bollworm infestation. Bollworms must ingest the Bt gene (Bollgard™) before they will die and it may take up to five days from time of ingestion to death. Infected larvae lose their appetite and stop feeding within hours. Survival increases as larvae mature and exceed ½ inch long or five days old. Management strategies differ from bollworm-susceptible varieties. Different scouting techniques and economic thresholds must be employed in Bollgard™ cotton. Shorten scouting intervals to two to three days during heavy ovipositional periods to determine if newly hatched larvae are being controlled. There has been some recent evidence of resistance to the Bollgard™ gene evolving in H. zea populations. Consider spraying if excessive fruit and boll damage are noticed and 10 small worms (¼ to 3/8 inch long) per 100 plants are found or six small worms are found in 100 flowers selected at random.

Please refer to the most recent version of the Cotton Insect Management Guide for specific control recommendations.