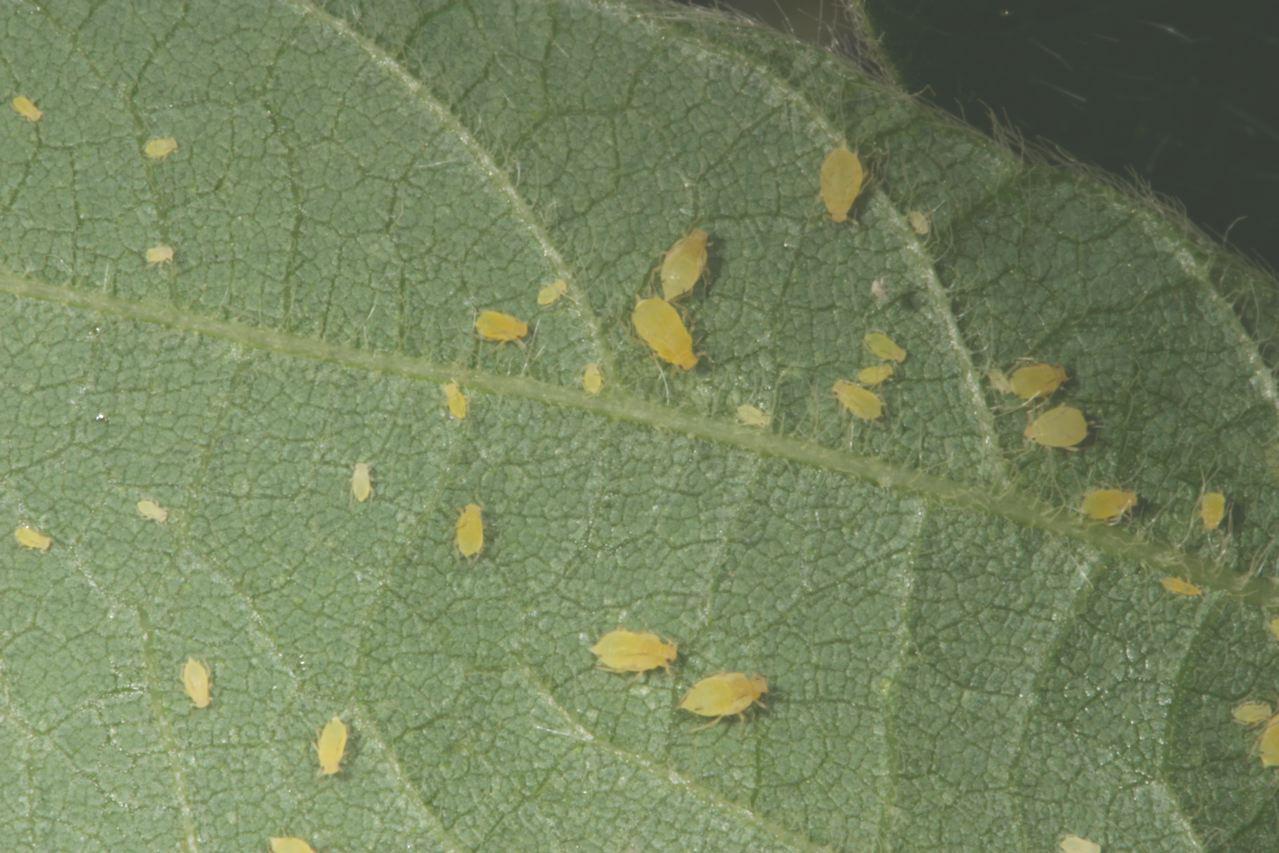 The soybean aphid has been present in eastern Kansas since 2002 and was widely distributed throughout soybean-growing regions of the state by 2004, with populations approaching damaging levels in some areas. From 2005 to 2007 soybean aphid populations were relatively low with no reports of serious injury. However, in 2008 populations were again well established in northeast Kansas. Cool weather during the summers of 2004 and 2008 is thought to be responsible for the problems in those years. Temperatures The growth of soybean aphid populations is inhibited at temperatures above 75˚F within the plant canopy. Thus cool summers will have a higher potential for soybean aphid problems and weather forecasts should be considered when sampling data is evaluated.

This is a very small, yellowish aphid with black cornicles. During vegetative growth look for aphids under young upper leaves, petioles and stems. Later in the season when the soybeans are in the reproductive stage look for aphids in the mid-canopy leaves and on the stems and pods. Soybeans in the early reproductive period are probably the most vulnerable to aphid attack. Other species of aphids occasionally infest soybean, but the soybean aphid is the only species to develop very large colonies.

Work in other midwestern states suggests that the economic threshold for soybean aphid is around 50 aphids per leaflet in pre-reproductive plants, and around 250 aphids per plant from R1 (beginning bloom) through R4 (full pod). This threshold incorporates an approximate 7-day lead-time between scouting and treatment to make spray arrangements or handle weather delays. Plants in early reproductive stages appear most susceptible to yield loss that takes the form of reduced pod number. Aphid populations on maturing plants are typically in decline and producing winged forms that will leave the field. Treating these fields is generally not justified because additional yield losses will probably not cover control costs.

This aphid is capable of causing severe damage when it achieves large numbers per plant. However, so far in Kansas, damage has been very minimal. This may be partly due the lack of overwintering hosts in conjunction with hot summer conditions. Soybean growers should remain watchful for this pest in Kansas, but resist the temptation to spray until populations exceed established thresholds. Producers and consultants are encouraged to contact Kansas Research and Extension through their local county extension office to report any significant infestation of this pest.

Seed treatments based on thiamethoxam (Cruiser and Cruiser Maxx) and imidacloprid (Attendant, Dyna- Shield Imidacloprid and Senator) are labeled for early season protection against soybean aphid. Thus far, seedling infestations of soybean aphids in Kansas have not warranted the use of seed treatments. However, there might be justification for treating seed of late-planted or double-cropped soybeans in North East Kansas in years of high soybean aphid populations.

For detailed information on the life history, biology and management of soybean aphid, see KSRE publication MF-2582, The Soybean Aphid: A New Pest in Kansas Soybeans.

You can find more information from other states at the Soybean Aphid Links Page.

Please refer to the most recent Soybean Insect Management Guide for control options.