We recently concluded a state wide survey for the soybean stem borer sponsored by the Kansas Soybean Commission and the K-State IPM Mini-Grants Program under USDA-CREES IPM Grant number 41531-0-01600. This survey detected several new counties that are now infested with this pest and also gives us a better idea of where serious populations of this pest exist in the state. 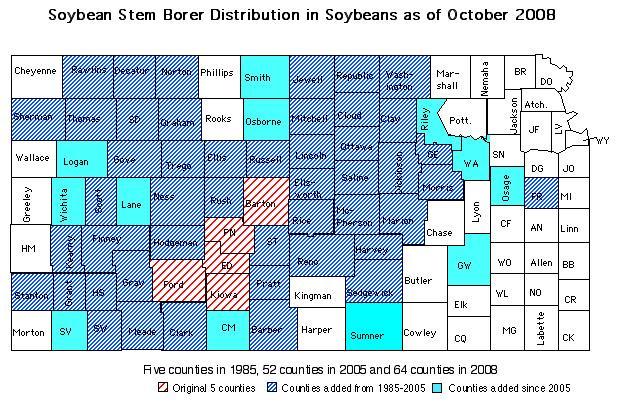 The above map illustrates the known distribution of this pest on soybeans in Kansas. From the initial infestations detected in five counties by the Kansas State Board of Agriculture in 1985, the problem has spread to 64 counties in the state. 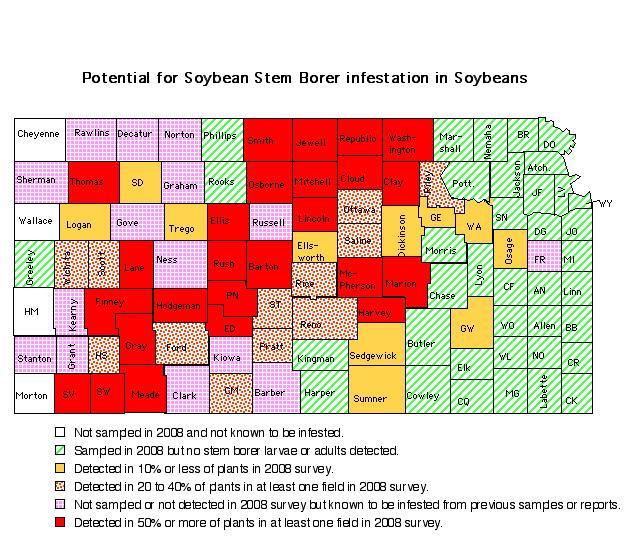 This map shows the relative infestation levels for the soybean stem borer in Kansas. The counties in red were found to have infestations where 50% or more of the plants in a sample were infested, thus have high levels of infestation and a high potential of seeing significant lodging. The counties in orange were found to have fields with 20 to 40% of the plants infested and thus also would have the potential to see noticeable lodging. Counties in purple are known to be infested from previous observations an thus also have a potential for noticeable injury. Counties in light yellow had detectable levels of soybean stem borer but at this time we would not expect serious injury. Counties in white and green have the least risk from the soybean stem borer at this time, since samples have been negative to this point. Keep in mind that surveys have been very limited looking at only one to four fields per county and that there is a history of this problem spreading and be coming more serious over time. Thus, counties not yet reported as being infested or with only low infestations are probably at risk especially if they are near counties known to have fields with high infestations.