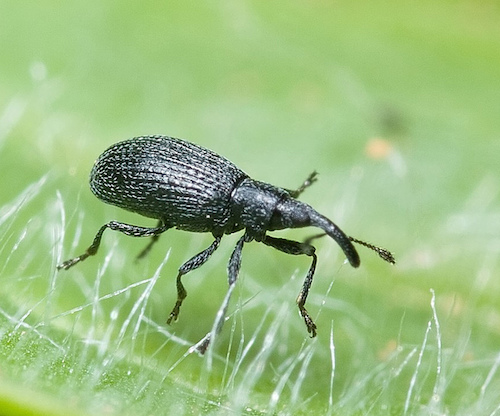 The black sunflower stem weevil is a small, shiny black weevil about 2.5 mm (1/10 inches) long from the base of its globose body to the end of its curved snout. The head seems remarkably small and tapers toward the long snout. Larvae and pupae are similar in appearance to those of C. adspersus, but tend to be smaller and more yellowish in coloration. This species is normally present in very low numbers in most Kansas sunflower fields, but is not usually abundant enough to warrant grower concern. This insect is more likely to cause economic losses to sunflower in Nebraska and South Dakota.

There is only one generation of A. occidentale per year but, in contrast to C. adspersus, it is the adult stage that overwinters as a free-living insect in the plant litter. These adults become active early in spring and can often be found feeding on wild or volunteer sunflowers before commerical fields are even planted. When overwintered adults are numerous, their feeding may produce distinctive pitting scars on the leaves of emerging sunflowers, and, although this damage normally has little or no impact on plant growth, feeding by very heavy adult populations has been known to cause isolated stand losses. Adult females lay their eggs underneath the epidermis of leaf petioles or the stem, usually near the leaf axil. When larvae hatch, they tunnel into the matrix of the main stalk where they feed and complete development, emerging as adults in August. Newly emerged adults feed first on pre-senescent leaves, moving later to the bracts of maturing flowers, before leaving the plants.

The complete host range of A. occidentale is not known, but includes a number of composite weeds. This insect is also a vector of the fungus Phoma macdonaldii Boerma that causes black stem rot and may contribute to preharvest lodging of mature plants. Spores of the fungus have been isolated from adults and are thought to be introduced into the plant during adult feedng and oviposition, the fungus subsequently spreading through the galleries produced by larval feeding.

By itself, this insect is unlikely to justify any control measures in Kansas, and most chemical treatments targeting C. adspersus appear to give simultaneous control of A. occidentale. Similarly, delayed planting dates that reduce infestation by C. adspersus will also reduce exposure of emerging plants to overwintered adults of A. occidentale as these usually die before the end of July. Growers concerned by the appearance of large numbers of black stem weevils in spring should follow material and treatment recommendations for sunflower stem weevil.