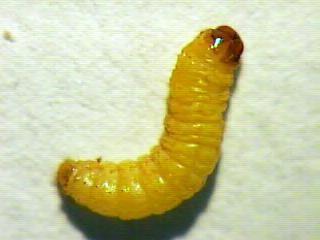 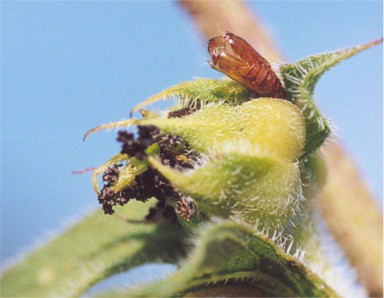 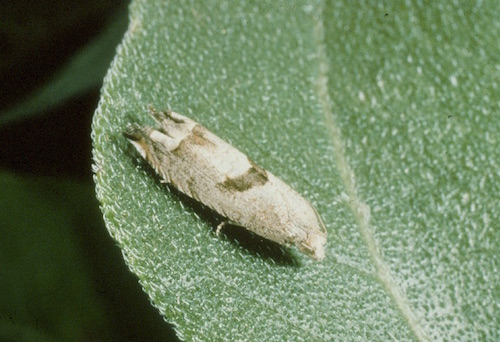 This is pale grey moth 8.0 – 12.0 mm (3/8 – 5/8 inches) long with two dark, transverse markings across the back of its forewings that remain clearly visible when the moth is at rest. The eggs may be laid on various plant parts and larval entrance holes are clearly discernible by the large lumps of black frass exuding from them. Attacks on plants in vegetative stages may kill the apical meristem, resulting in a branching plant. When plants are attacked in reproductive stages, flower buds are the preferred site for oviposition and the entire head can be severely deformed. Mature larvae pupate within the plant stalk or flower receptacle and empty pupal cases are sometimes left protruding from emergence holes. Diapausing larvae can be recovered from the upper portions of infested stalks in late fall.

The sunflower bud moth completes two generations per year in Kansas. Larvae of the first generation typically develop in vegetative parts of the earliest germinating wild sunflowers, although early-planted cultivated varieties also may be attacked in vegetative stages. It is the larvae of the second generation that typically bore flowers and heads in most commercial plantings. Little is known of the ecology of this species, but a variety of composite weeds appear to serve as alternative host plants. Larvae are frequently parasitized by various wasp species when recovered from wild sunflowers, but less frequently when recovered from cultivated plants.

Growers’ attention may be drawn to mishapen plants with large lumps of black frass exuding from the stalk so there is need to recognize the cause of this damage. Usually, only a small proportion of plants in a field are affected by bud moth and only a fraction of those plants attacked in vegetative stages will fail to produce a head due to meristem destruction - most continue to develop normally. Consequently, no economic threshold has been established and chemical treatments directed at bud moths are not considered economically justified.