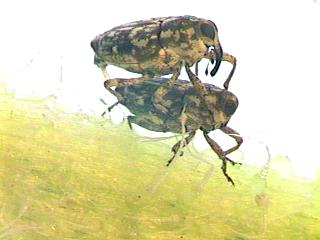 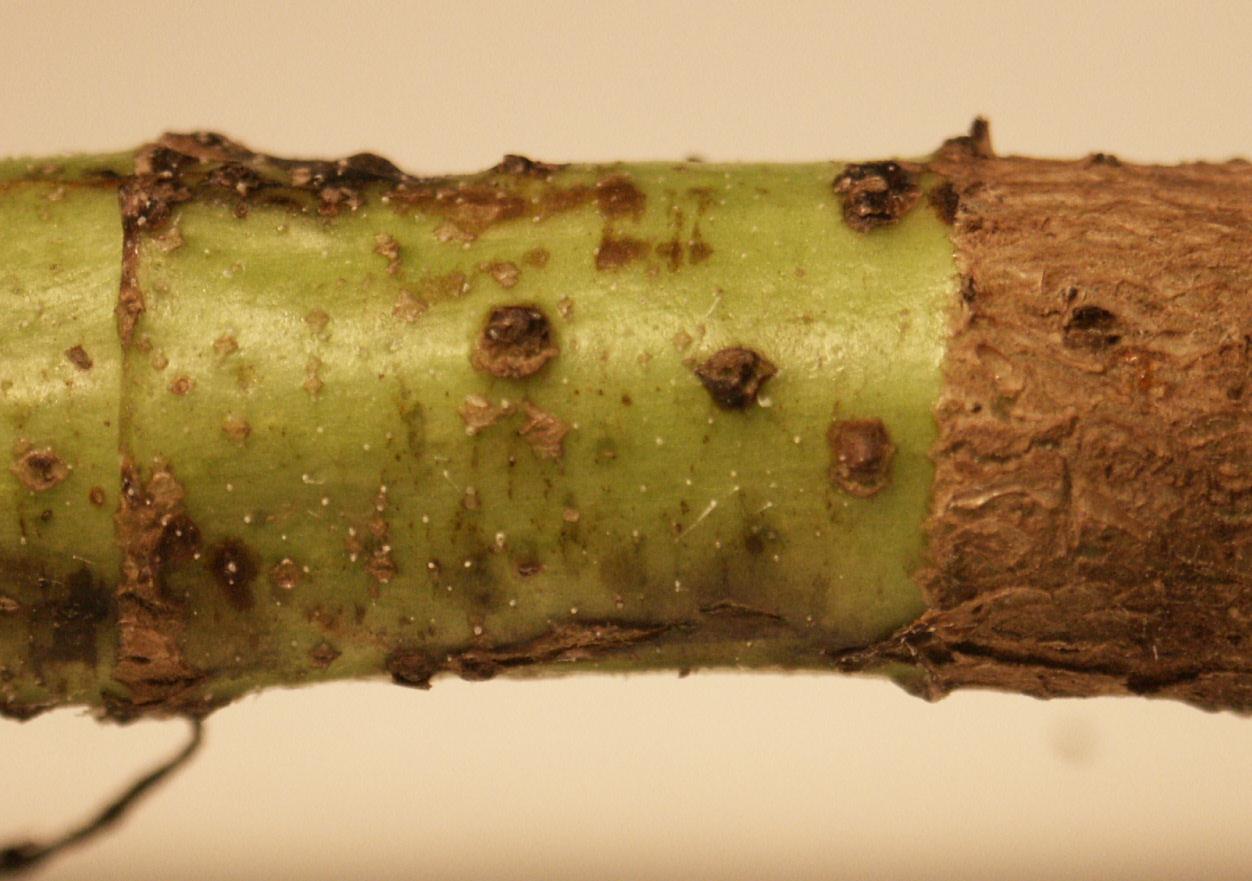 Callous tissue formed around oviposition punctures at base of stalk

The sunflower stem weevil is a pale, speckled weevil 4-5 mm (3/16 inches) long with a short, curved snout that is held downwards beneath the head. The eyes, snout and antennae are black. Adults are cryptic and very reclusive, responding to disturbance by scurrying around the opposite side of a stalk or falling from the plant. They may spend many hours of inactivity concealed in small aggregations within dried up cotelydeons while plants are still young. Plants between the V8 and V12 stage seem to be preferred for oviposition, and oviposition punctures in the main stem gradually become evident as they scarify and form blackened callous tissue. Initially, most ovipositions occur around the lower leaf nodes, but later they can occur higher up on the stalk if there is competition for oviposition sites. Larvae are cream colored and can be easily found within their galleries by splitting stalks lengthwise to their base with a stout-bladed knife.

There is only one generation of C. adspersus per year and mature larvae overwinter within the lower portions of the dead stalks. Pupation and emergence of adults is temperature-dependent and follows a degree-day model. Callow adults may remain for many days within the stalk before chewing an exit hole and the sudden emergence of many adults is often triggered by rainfall. Although adults can live for many weeks in the laboratory, weather conditions in the field tend to limit adult survival such that most eggs are laid before the middle of June, with the result that sunflowers planted after the first week of June normally escape infestation.

This insect is the primary vector of the fungus Phoma macdonaldii Boerma that causes black stem rot. Several year’s observations in central Kansas indicate that controlling weevils effectively eliminates this disease. Fungal spores are introduced into the plant by adults and the fungus appears to proliferate through the stalk by following the galleries produced by larval feeding. Lodging of mature plants prior to harvest is often caused by a combination of larval feeding and fungal rot that collectively weakens the stalk to the point where wind or other stresses knock the plant over.

Interestingly, densities of stem weevil larvae are invariably much lower in wild Helianthus annuus than in neighboring cultivated varieties, suggesting that much natural resistance to the weevil has been inadvertantly lost in the process of developing agronomically attractive cultivars. Research efforts are underway to identify breeding lines expressing stronger resistance to stem weevils, especially under drought conditions. Although a number of wild composite weeds, notably cocklebur, frequently harbor sunflower stem weevils, economically damaging populations are often associated with continued sunflower cultivation in a particular locality.

Although the sunflower stem weevil is often the most abundant insect within cultivated sunflower stalks in Kansas, sometimes reaching more than 200 larvae per plant, it is primarily a pest of dryland sunflower production and is mostly a problem in drought years. Although it has been speculated that the economic threshold may be 40 or more larvae per plant, studies in central Kansas suggest little or no impact of larval tunnelling on plant productivity, even with 50-80 larvae per stalk. Most yield losses likely arise from the pre-harvest lodging of plants with weakened stalks. There appears to be a strong link between plant water balance and sunflower resistance to stem weevil larval development. Several studies have now shown significant reductions in larval infestation with even limited irrigation treatments and the highest stem weevil populations are typically associated with drought conditions. All factors that exacerbate plant competition for moisture (e.g. failure to adequately control weeds, planting too high a plant population) may indirectly enhance the survival of stem weevil larvae and exacerbate problems, especially under drought conditions. Since adults are difficult to scout with any degree of accuracy, and since their numbers typically fail to correlate with subsequent larval infestation of sunflower stalks, making treatment decisions based on spring counts of adults is no longer recommended. In a region with a history of stem weevil problems growers may assume that any dryland sunflowers will be at risk, and that their impact on the crop will increase with adversity of growing conditions.

Planting relatively short-season cultivars after the first week of June is one way to effectively manage stem weevils, but entails a potential cost in terms of lost plant productivity since late plantings have little foliage present during the longest days of the growing season. Fortunately, stem weevils appear very susceptible to many insecticides registered for use on sunflowers, making them easy to control with either contact or systemic materials applied during the V8 – V10 stage. Systemic materials such as carbofuran give simultaneous control of stem weevils and most other stem-infesting insects, and may also preserve stalk integrity by delaying processes of deterioration. It should be noted that densities of other stalk insect larvae such as tumbling flower beetles and root moths are often postively correlated with those of stem weevils when they are abundant, suggesting that large numbers of stem weevil larvae collectively weaken plant resistance, improving the survival of other stalk-boring larvae. Although seed treatments can be useful for improving seedling establishment, their duration of activity within the plant is not sufficient to provide control of stem weevils.

Stalk destruction or burial can significantly reduce overwintering survival of weevils, but such mechanical control is usually incompatible with moisture conservation in dryland farming. Both the survival of stem weevil larvae and their impact on crop standability appear substantially diminished when sunflower plants are strong and healthy. The best way to obtain strong plants with good resistance to weevils is to ensure fields are not planted at such a high a density that plants compete excessively with one another for water and nutrients, as overplanted fields suffer higher yield losses from weevils and other causes whenever drought conditions prevail.

Please refer to the most recent version of the Sunflower Insect Management Guide for control options.