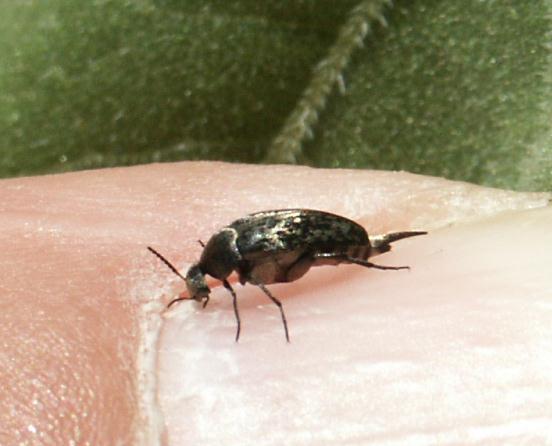 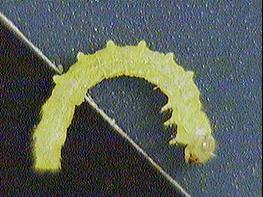 These are elongate, beetles 3.0-5.0 mm (1/8 – 3/8 inches) in length that vary widely in coloration, although the most common species in Kansas are dark brown or black and gleam with irridescent hues in the sunlight. Additional photos of various species can be found here: www.pbase.com/tmurray74/tumbling_flower_beetles_mordellidae.
The wing covers are relatively short leaving the terminal abdominal segments exposed and, in females, the ovipositor remains extended from the abdomen and is clearly visible. These are very active beetles and strong fliers, but typically fall from plants to the ground when approached. They use enlarged femurs on their hind legs to kick off from the substrate and tumble, hence their common name. The larvae are yellowish, very elongate, and have three pairs of short, but well developed, legs at the anterior end.

The tumbling flower beetle has one generation per year, the adults emerging in spring around the same time as stem weevils. The adults feed mostly on pollen and the females insert their eggs just under the epidermis in sunflower petioles. Early planted fields normally host the most larvae. Stalk dissections in Kansas suggest that this is possibly the most abundant of all stem-boring insects in wild H. annuus where as many as 30 or 40 larvae may reside in the same plant, all distributed in different branches. They are not nearly as abundant in cultivated sunflowers where stem weevils seem to predominate, possibly due to the lack of branches that seem to be their preferred niche within the plant. Similar to the cerambycid larvae that also inhabit the pith core of the stalk, they are highly aggressive toward one another and do not tolerate the presence of conspecifics. Interestingly, in cultivated sunflowers, larvae are found in the matrix of the main stalk, not in pith core, possibly because they are unable to compete with the much larger cerambycid larvae for this niche.

There is no economic injury level for tumbling flower beetles in sunflowers, but the larvae may contribute to stalk damage collectively with other insects. They are easily distinguishable from most other boring larvae in sunflower stalks and should not be mistaken for species of greater economic significance.