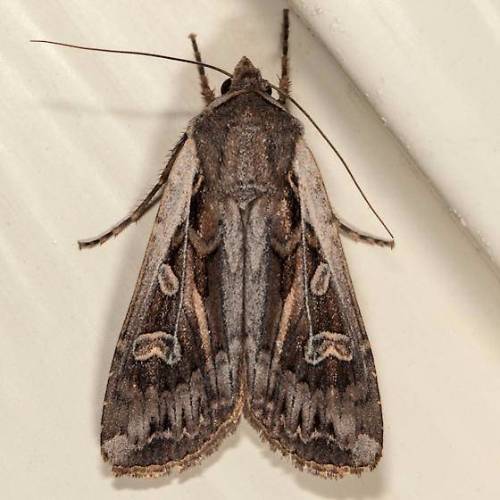 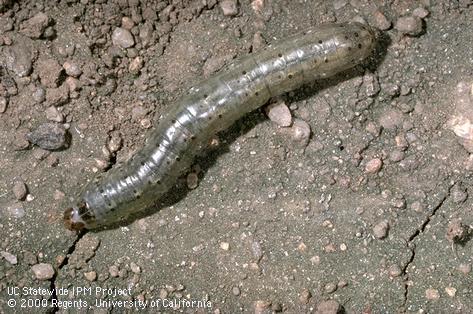 The army cutworm is a late fall to early spring pest that occurs sporadically in the western half of Kansas. Adult moths lay their eggs in soil in the fall. The brown, faintly striped larvae hatch during the fall and early winter. Larvae feed on many plant species, and each adult female can lay more than a thousand eggs, both factors contributing to the outbreak potential of this species.

Larvae begin feeding during the winter whenever temperatures rise a few degrees above freezing. Small larvae chew "windowpane" holes in leaves that often go unnoticed unless plants are carefully inspected. Larvae hide in loose soil at the base of plants, emerging to feed in the evening. Unlike some other cutworms, only above ground plant parts are consumed. Infestations in fields with well established root systems will probably not justify late fall or early winter insecticide applications while wheat is still dormant. However, some fields never green up in the spring because of cutworm feeding. Frequent inspection of fields during warm periods in February, March and early April is strongly encouraged, particularly when preceded by a dry fall. Moisture availability, crop condition and regrowth potential are all factors influencing potential losses to this pest. Late-planted fields under dry conditions with poor tillering may suffer economic damage with as few as one or two larvae per square foot. In most fields, treatment will not be necessary until populations average four to five worms per square foot. Vigorous, well-tillered fields under optimal growing conditions can tolerate even higher populations, as many as nine or ten larvae per square foot without measurable yield loss. Infestations in later stages of crop development are less damaging than early ones.