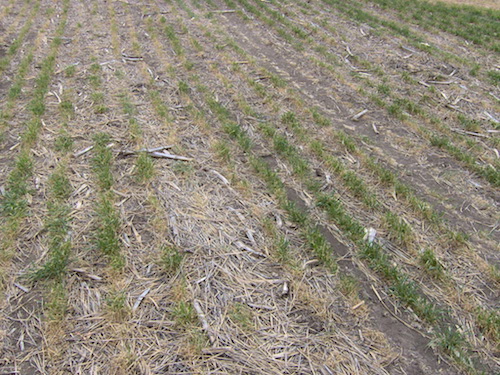 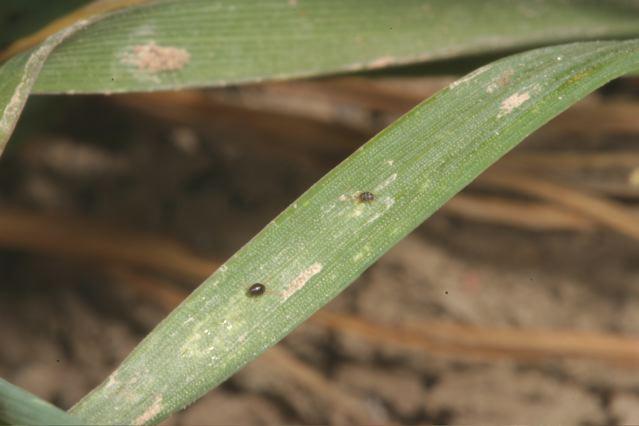 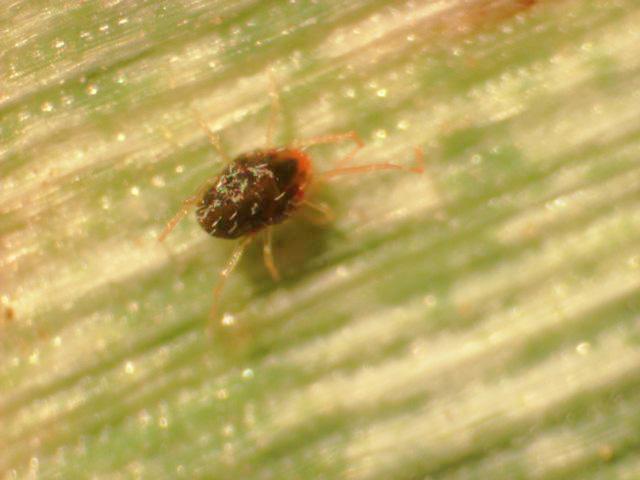 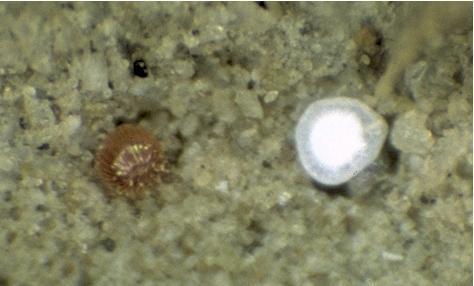 The brown wheat mite, Petrobia latens (Müller), is a common pest of dryland wheat in western Kansas that can be a problem as far east as Manhattan in dry years. It damages wheat plants by destroying plant cells as it feeds, causing a stippling of the leaves. Brown wheat mites have a tendency to feed on the tips of the leaves, causing them to dry out and die. Heavily infested fields present a scorched, withered appearance.

Brown wheat mites are metallic brown to black, and about the size of a period in ordinary newspaper print. Their legs are pale yellow, and their forelegs are distinctively longer than the other three pair of legs. Females of the brown wheat mite are known to lay two types of eggs. Both types of eggs are laid on soil particles near infested plants. During the winter, females lay nearly spherical, cherry red eggs that can hatch in a week with favorable weather. In the spring, females lay white eggs with a waxy coating and a ruffled cap that do not hatch until fall. No one female can lay both types of eggs.

Brown wheat mites pass the summer as diapausing (resting) eggs in the soil. These eggs hatch in the fall as temperatures and moisture conditions become favorable. The brown wheat mite has a short life cycle and can produce multiple generations during the winter. One or two generations can develop in the fall and another two or three generations in the spring. Brown wheat mites feed in the daytime, with activity on the plants reaching a peak about mid-afternoon. They do not produce webbing. When disturbed, they run rapidly over the leaf surface or drop to the ground. At night they crawl down into the soil. They can survive cold temperatures without any problems, but their populations can be quickly reduced by a beating rain. The brown wheat mite historically has been a problem during drought cycles in western Kansas. It is generally only a pest on continuous wheat or where volunteer wheat was allowed to grow on summer fallow ground.

Brown wheat mite activity is highest in late fall and early spring, with populations usually peaking around mid-April. Outbreak potential is high because all adults are female, and each can produce 70 to 90 winter eggs in a three-week period. Later in spring, females begin laying small, white, oversummering eggs in the soil at the base of infested plants.

Brown wheat mite populations can be difficult to assess as mites quickly drop off plants if leaves are disturbed. The economic threshold is not well defined, but is estimated to be at least several hundred mites per foot of row in early spring. Concern is greater if plants are stressed or poorly tillered. Treatment response often depends on subsequent rainfall. By late April, adults begin to lay the white, diapausing eggs and populations are generally on a natural decline. Once the white eggs are found and most of the red, winter eggs have hatched, chemical controls are usually not justified

Please refer to the most recent Wheat Insect Management Guide for control options.