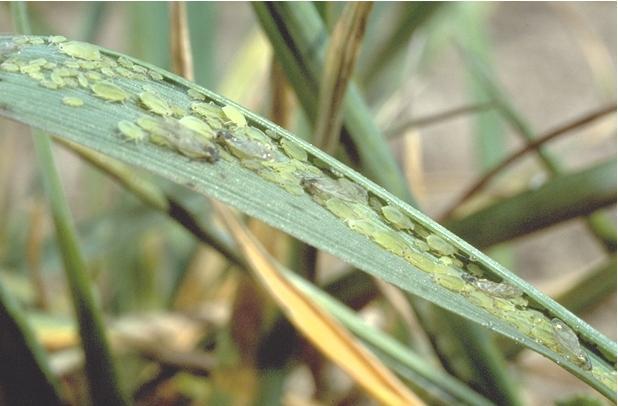 Greenbugs are pale green aphids with a dark green line down the back and antennae as long as the body. Greenbugs usually prefer to feed on the underside of lower leaves. Damage can occur in fall or spring, with tiny reddish spots on leaves signaling a beginning infestation. Later, infested leaves turn yellow, then reddish brown and eventually die. In the field, damage often appears as yellow or reddish-brown irregularly shaped patches that can spread to become almost field-wide.

The guidelines in the following table are useful in estimating the need for greenbug control. For convenience, damaging levels are expressed as the number of greenbugs per foot of row, but in assessing the need for control, the thickness of the stand also becomes important. 50 greenbugs per foot of row in a thin stand would be more serious than in a thick stand because the number of aphids per plant would be greater. Similarly, larger plants can tolerate somewhat larger numbers of greenbugs before significant damage occurs.

Approximate Damaging Levels of Greenbugs
Stage and development of plants No. of greenbugs per linear foot
Seedlings, thin stands less than 3 tillers 50
3- to 6-inch wheat, 3 tillers or more 100 to 300
6- to 10-inch wheat 300 to 500

Treatment during early fall is advisable as soon as the threshold is reached, unless a great number of beneficial insects are active. Look for ladybeetles and their alligator-like larvae on the wheat, and the brown, dried-up husks of parasitized aphids (mummies) adhering to leaves. Greenbug numbers usually decline naturally during December and January, and treatment is rarely necessary during this period unless the weather is unusually mild.

In southern parts of the state, overwintering greenbugs can rapidly develop into damaging infestations during warm periods in February and March, and close surveillance of fields is necessary if greenbugs are present. Beneficial insects such as parasitic wasps and ladybeetles become increasingly effective in reducing greenbug populations around mid-April. Once parasitism levels reach between 10 and 15 percent, greenbug populations usually decline fairly rapidly.

Greenbug control on small grains is occasionally needed during periods of relatively cool weather (below 60°F, but above freezing). Experience has shown that good results are possible under these conditions with some, and perhaps most, of the recommended insecticides. However, dimethoate may not give acceptable control below 60°F.

Nonchemical management options are useful in reducing greenbug populations and damage potential. A number of Kansas wheat varieties have resistance to greenbugs, so consult with seed suppliers about currently available cultivars. Avoid unusually early or late planting dates. Increased crop residue on the soil surface also can lower the risk of infestation, so no-till wheat tends to have fewer problems with this pest. Avoid pesticide applications when beneficial insects such as lady beetles and parasitic wasps are numerous, as these are often  prevent greenbugs from reaching damaging levels. Augmenting greenbug predators such as ladybeetles or lacewings by importing and releasing is not advisable.

Seed treatments offer early season protection and may be appropriate in parts of southern Kansas where the risk of infestation is greater. Many contain imidacloprid (Dyna Shield Imidacloprid, Gaucho, Gaucho Grande, Gaucho XT, Imida, and Senator).

Reference labels for information on how these products should be applied. Some products indicate that they are to be commercially applied and others allow end-use seed treatment on agricultural establishments in liquid or slurry treaters at or immediately before planting. Some carry the warning to not graze or feed livestock in treated areas for 45 days after planting.

Thiamethoxam (Cruiser) is another systemic neonicotinoid. This chemical is commercially applied to seed at 0.75 to 1.33 fl. oz. of Cruiser 5FS per 100 pounds of seed. It is often combined with a fungicide treatment.

Please refer to the most recent version of the Wheat Insect Management Guide for other insecticide options.

More detailed information on greenbug biology and life history can be found in publication MF3183.