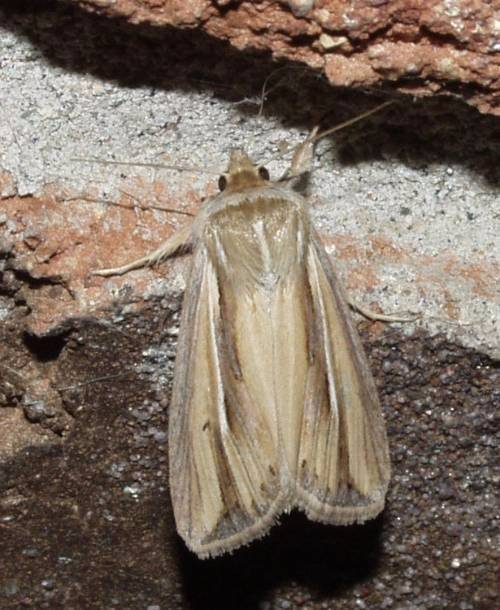 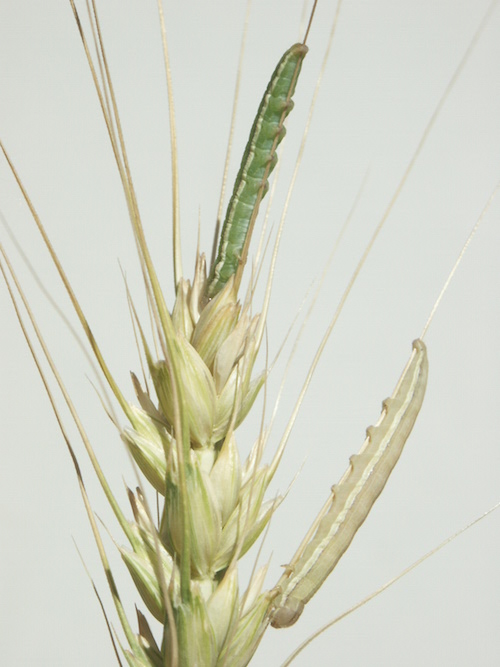 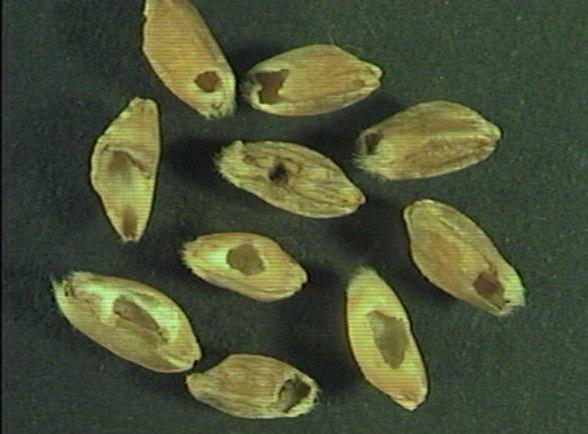 The wheat head armyworm, Faronta diffusa (Walker) (Lepidoptera: Noctuidae), is a minor pest of wheat in most years, but occasionally can cause noticable crop injury. Unfortunately, the first indication of a wheat head armyworm problem is often when wheat is downgraded at harvest because of insect-damaged kernels, or when larvae are noticed on grain screens at elevators. Damage to kernels by the wheat head armyworm is difficult to distinguish from that of certain stored product pests and can be classified ‘IDK’ (insect damaged kernels). Infestations are usually too sporadic and isolated to justify any type of scouting or treatment program.
Identification

The adult moth is yellowish brown with a chocolate-colored stripe down the length of each forewing. The larvae vary in coloration from greenish to cream-colored, depending on the maturity of the grain they have consumed, but all have longitudinal white and brown lines down each side of the body. Larvae feed on the wheat heads from evening to early morning, typically hanging onto the awns upside down and hollowing out kernels. They rest in the soil at the base of the plant during the day. Damaged kernels appear hollowed out and resemble those damaged by stored grain pests.

The insect passes the winter as a pupa in the soil, emerging as an adult in the spring to lay eggs on a wide variety of grasses, although wheat is highly preferred. Unlike the true armyworm, there is more than one generation per year, but it is the first generation of larvae that feeds on maturing wheat heads and causes direct damage to kernels. Second generation moths emerge over an extended period in summer months and lay eggs on warm season grasses. Fall flights of F. diffusa can be observed well into October and it is not clear if a portion of these represent a third generation, late-developing second generation individuals, or some combination of both. Larvae that complete feeding on maturing warm season grasses in the fall pupate in the ground but remain dormant until the following spring.

There are no established management plans for this pest. Infestations are usually concentrated around field margins so scouting efforts for this pest would need to include interior transects to obtain a representative estimate of population levels. In addition, no economic threshold has been determined. There are no materials specifically labeled for this pest, but materials registered for other armyworms in wheat would likely provide control if applied sufficiently early. However unless detected well in advance of crop maturity, treatment would be impractical because the pre-harvest interval requirement of most insecticides would cause even greater losses due to delayed harvest. Larvae arriving in storage bins with harvested wheat either die or emerge as moths, but are not a concern in stored grain.